The JNUTA strongly condemns the JNU administration’s launching of an Executive Council ‘enquiry’ into “the role of faculty members” into an alleged incident after the 142nd AC meeting had concluded on 26 December 2016. For all its much vaunted concerns for transparency, this so-called enquiry only has the intent exacerbating the prevailing atmosphere of constant intimidation, muzzling of free exchange of views, and a fundamental disregard for the basic articles of enquiry. 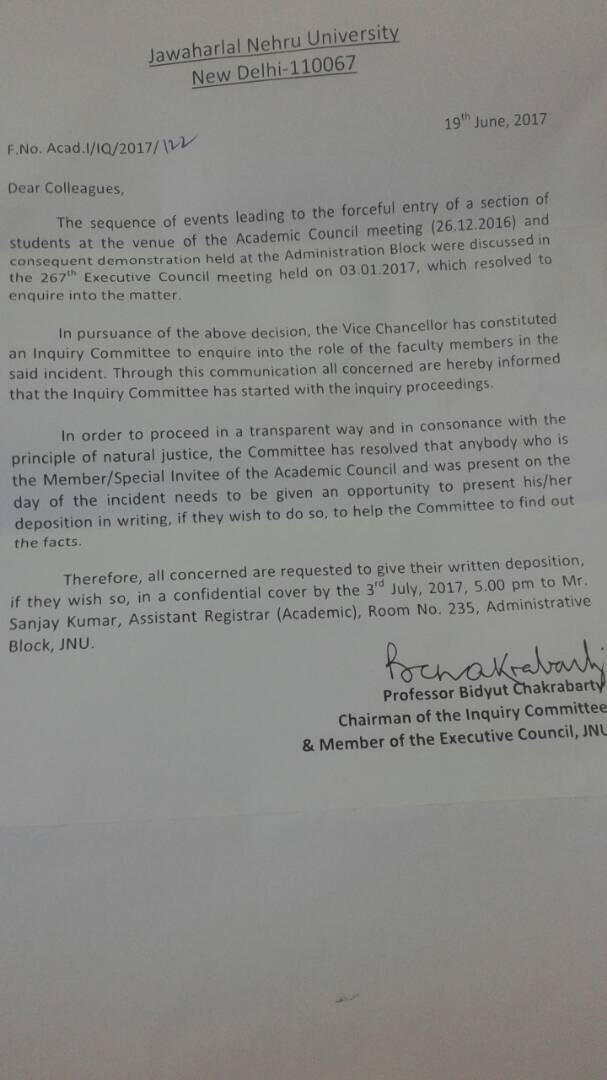 The JNUTA would like to apprise the Executive Council of what the Supreme Court in 1985 to be integral to the notion of natural justice: the person so charged must be informed of what the specific charges against her are, and the entire evidence against her. All witnesses presented by the prosecution must be examined in her presence, she must be given the right to cross-examine them as well as afforded all opportunity to lead evidence against the charges against her. Nothing in this notice of the enquiry gives the JNUTA any confidence that any of these are going to be guaranteed in this enquiry. No reason has been given for the premise that faculty members were behind the incident, and the JNUTA roundly condemns this innuendo. Since no faculty member is named, is the JNUTA to assume that all faculty members are equally under suspicion? Or is this a fishing expedition to target some faculty members, who will be named as ‘instigators’ on the basis of a few ‘confidential’ depositions?

This administration’s abysmal record in conducting enquiries (remember the HLEC) is set to be repeated again. The 267th Executive Council meeting was held on the 3rd of January 2017, the incident at the 142nd AC took place on the 26th of December 2016. JNUTA can only wonder at the fact that this so-called enquiry was forgotten about for six whole months.

The JNUTA is left with no other alternative but to assume it has been the proceedings and the sustained expression of dissent at the 143rd AC that jogged the JNU administration’s memory at this late hour, but it would like to remind the JNU administration that JNU teachers too have the power of recollection — of their rights as employees and as citizens

The JNUTA has always maintained that the reconvened 142nd AC meeting on 26 December 2016 was deplorably conducted, where agenda items were announced as approved without allowing faculty to express their views or record their dissent on admission policy,  revisions to the M.Phil. and PhD Ordinances, and the VC’s misappropriation of power in order to stack the quorum of Selection Committees. The EC has been alerted to all these violations of due process by JNUTA and the teacher representatives on the EC. Fifty members of the AC and EC wrote to the Executive Council just recently regarding the revisions to the Ordinances. Instead of taking steps to address this gross mismanagement of affairs in the University, the JNUTA is extremely saddened that the EC has chosen to  go down a path that leads to the witchhunt of faculty.