The 144th Academic Council meeting continues to be fertile ground for the most flagrant fabrication. Not content with manipulating the minuting of the proceedings and decisions of the meeting, the JNU Registrar has circulated a notice dated 22 December 2017, amending the minutes to state that the AC approved  a pass mark applied at the level of the viva voce: 40% for General, 36% for OBC, and 30% for SC/ST/PH. No such decision was taken by the 144th AC of course. 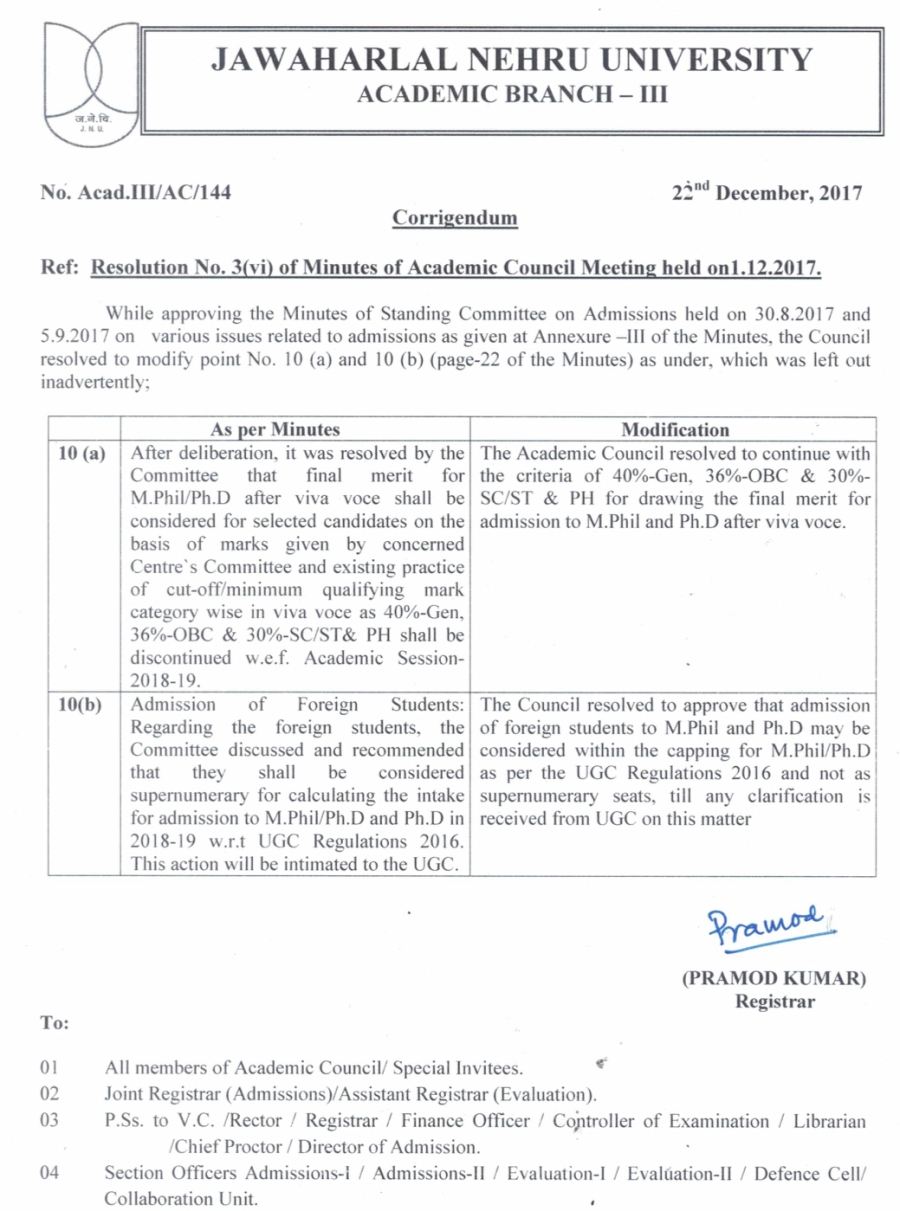 It will be recalled that in fact no discussion on this agenda item (the minutes of the Standing Committee) was allowed, as the Vice-Chancellor pronounced the matter sub judice. The minutes of the Standing Committee on Admissions presented to the Academy Council, as contained in the left hand column, recorded the decisions in (10a) and (10b), and these minutes were deemed approved in the 144th AC.

The last date for the receipt of comments to the minutes of the 144th AC was the 27th of December, but the fact that, even without waiting for members to respond to this utter fabrication, this corrigendum was issued on the 22nd, signifies an extraordinary desperation on the part of the JNU administration to ensure that its no-admission policy continues. As we have noted in the JNUTA report on the 2017-18 admissions, this one illegally implemented provision ensured the non-offer of quite a few seats for admissions for the current academic year. (It will be recalled that Centres/Schools were not intimated about the application of the pass-mark before the viva voce, and that this step was being taken was revealed only when the final offers were to be put on the website.)

Clearly, the JNU administration is loath to give up any dirty trick it has in its arsenal to ensure that intake is not fulfilled in 2018-19 as well. The belated re-introduction of a viva  pass-mark is perhaps due to the fact that the JNU administration was foiled in the attempt to delink the M.Phil./PhD integrated programme. The JNUTA wonders why the JNU administration does not think that the submissions it made to the Delhi High Court hold even in this case too? The Registrar had on behalf of JNU, assured the DHC that “that admission program qua the present petitioners shall not be varied and the admission brochure/prospectus pursuant to which the petitioners had applied for admission and had been issued the admit cards will remain the same.” A notice 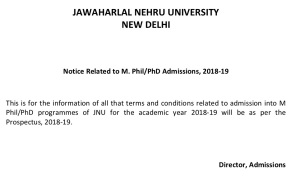 to the same effect has also been posted on the JNU website, where it is until today. How can a new criterion be announced when the admission policy/prospectus had no indication that a pass mark was to be applied at the level of the viva voce? Refuge cannot be taken in the hallowed UGC Regulations 2016 for this, as there is no mention of this provision for this.

The JNUTA warns the teachers to expect many sudden alterations in admission policy and procedure as the process for evaluation of the answer scripts begins. Colleagues are requested to consult the admission policy/prospectus issued by JNU and the court order, both linked above, in this very likely event.